Is creativity something that can be learned? In other words, can anyone be creative? These are questions that some of the attendees at the Design Thinking workshop at the Klasmann-Deilmann Innovation Center in Geeste undoubtedly asked themselves. Members of the Hasso Plattner Institute from Potsdam, which leads the field in this sector, explained the different phases of “Design Thinking” to our young employees. 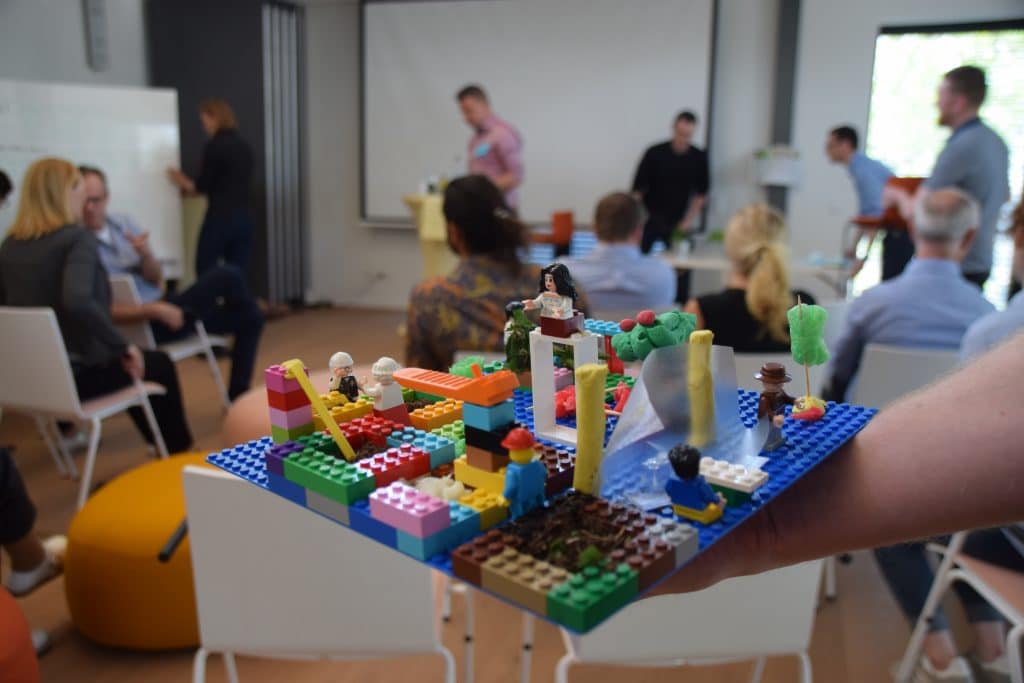 The 13 young men and women are busy making things with Lego bricks and figures, multi-coloured polystyrene parts, rubber bands, toothpicks, paper cups, felt pens, cartridge paper and various other utensils. They are employees from Germany, France, Ireland, Lithuania, Latvia and the Netherlands and they are working on a prototype for use of the currently vacant storage building in Groß Hesepe. The challenge: to design a new location experience for the staff there.

But how do you come up with the bright idea you need to make a prototype in the first place? This is actually one of the final phases of the creative process. Under the instruction of members of the Hasso Plattner Institute, our junior staff reached that stage by applying the principles of “Design Thinking”: understanding, observing, defining the viewpoint, finding ideas, developing and testing a prototype. “First of all, you have to learn as much as you can about the problem involved, to identify the relevant questions and understand the users who are involved,” explains lead coach Samuel Tschepe. Although the different phases are completed one after the other, it is always a good idea to look back over the preceding phases and keep adapting things if necessary. This is because knowledge acquired at a later stage of the process can actually change the starting point, which means it is important to remain open-minded for new ideas and findings instead of clinging on to the initial plan.

The focus is on the user. “This is a central principle of Design Thinking,” states Samuel Tschepe. The product does not have to please the developer, but the person who is going to use it, i.e. the customer. Accordingly, our junior staff swarmed out and interviewed employees in Groß Hesepe. But before they did so, they learned appropriate interview techniques to give them a better idea of how to identify the users’ needs. Empathy and the ability to listen are essential criteria for recognising the customer’s wishes.

Working in teams, they collated, discussed and scrutinised their results, looked for overlapping areas, developed the viewpoint, synthesised the findings. The inspiration at the end of these processes is the starting point for finding ideas. The coaches taught the young employees various creativity techniques in preparation for their work and sent them off with the following words of advice: “Fail early, fail often.” Samuel Tschepe explains: “A lack of inspiration and fear of making mistakes are typical factors that inhibit creativity. That is why we believe it is important to address these aspects so that the teams can successfully embark on the phase in which they find ideas.”

The key principles of the idea-finding phase are experimentation, teamwork and visualisation. The “ideas train” is a good example of this. The team forms a line and then begins to move around – this can be in a room, throughout the whole building or even outside. All members of the team are equipped with a pen and stickers. The member at the front of the line calls out an idea or a thought. The person behind him spontaneously answers the first thing he associates with that idea, writes it down on a sticker, which he then sticks to the back of the person in front of him. This continues down the line, always working on the principle of association and building up on the ideas of the other members.

The collection of ideas is followed by the decision-making phase. Our young employees rejected a number of ideas in order to develop one good idea and to make the prototype, for example by using the material described above. The prototype does not have to be perfect by any means. It is important to give the test user an idea of the planned product. The principle “Fail early, fail often” is applied in order to integrate the customer’s viewpoint, but also to recognise weak points at an early stage and thus save costs. The procedure is iterative: the developers continue to adapt their prototype step by step, always in consultation with the user.

At the end of the three-day workshop, our junior staff presented the results of their work to a wide audience. But more than that, they also demonstrated what they had learned: acting the parts of the potential users, they conveyed a good impression of the users’ needs, placed the focus on empathy, told their personal stories. It is exactly this procedure that follows the key basic principles of Design Thinking: a user-oriented approach combined with visual work. The focus is on the user, not the developer.

This marked the end of the second international team event for our junior staff. The first meeting took place in Rotterdam in October 2017. They will be invited to Šilutė in Lithuania for the next meeting; the final international team event of this two-year training programme will be held next spring. Between these group meetings, the company supports the development and promotes the skills of the individual team members. At meetings with Human Resources staff and their supervisors, the young employees look at opportunities for their professional development and draw up a plan for achieving these goals.

Design Thinking is another element with which we hope to boost our powers of innovation. The experience acquired at our incubator has already shown that it makes sense to involve the customer in product development at an early stage. Working with prototypes is a new and promising approach in this process: the prototype quickly gives developer and customer a clear idea of the product before we invest a lot of time and money in the details. Negative feedback is deliberately accepted and the learning and development processes are accelerated so that the products are ready for market rollout sooner.