A need to secure supplies of growing media

Round-table conference with Klasmann-Deilmann and BMEL

More alternative raw materials, less peat. Klasmann-Deilmann had invited Germany’s Federal Ministry of Food and Agriculture (BMEL) to a round-table conference aimed at discussing opportunities and limits associated with long-term developments. The background: the ministry’s peat reduction strategy and related voluntary commitments on the part of the country’s substrate producers. As before, the two sides’ objectives differ when it comes to lowering the proportion of peat in growing media.

n ‘Zentralverband Gartenbau’ (ZVG) and the horticultural-industry organisation ‘Industrieverband Garten’ (IVG), producers’ organisation Growing Media Europe (GME), the Thünen Institute (a land use think-tank) and policy-makers; during the online conference, they shared their views and discussed the state of play. The hosts were Moritz Böcking (Managing Director Klasmann-Deilmann Group) and Dr Thomas Schmidt, a high-ranking ministerial counsellor, head of the department for horticulture and landscaping at the BMEL.

Böcking reminded the meeting that, with regard to both raw materials and products, the substrate industry operates on a long-term cyclical basis and involves a closed “value circle” that is largely independent of imports from outside Europe. This, he said, means that the sector is a highly dependable partner in all horticultural segments, and makes it more resistant to crises such as the coronavirus pandemic. “Throughout the world, our growing media form a sound basis for feeding populations healthily. Our industry is a key factor in the success of the farm-to-fork strategy in Europe,” Böcking remarked.

Dr Schmidt confirmed that the substrate sector is part of Europe’s “critical infrastructure”. At the same time, he added, it is – like any branch of industry – affected by the endeavours of the European Union and the Federal Republic of Germany to cut emissions. In the substrate industry, it is peat production and use that are particularly impacted by these objectives. In implementing the peat reduction strategy, the BMEL is relying on the sector’s willingness to commit voluntarily, on transparency of process and on a “seamless transition”.

Different perspectives on opportunities and risks

The focus of the specialist presentations was on developments in nature conservation and climate change mitigation, increasing usage of alternative constituents, and acceptance of reduced-peat substrate blends within the commercial-horticulture sector. Emissions from peat production and usage were the subject of debate, with different sources and approaches to calculation resulting in widely different outcomes. Opinions also diverged as to whether wood fibres, green compost and other alternative constituents will be available in sufficient quantities, and in the necessary quality, over the long term.

Cecilia Luetgebrune, Secretary General of Brussels-based GME, advocated that peat-based growing media should not be viewed solely in terms of their climate impact. “The political debate seems to ignore the fact that use of growing media – whether peat based or not – actively helps to combat climate change by lowering inputs of resources such as water, fertiliser and chemical herbicides in horticulture, enables afforestation on a large scale, and makes our towns, cities and living spaces greener.” She stressed that growing media play a key role in the Europe-wide transformation that makes commercial horticulture become even more sustainable.

Dr Hans Joachim Brinkjans, Deputy Secretary General of the ZVG, warned that unilateral national initiatives regarding peat use could distort competition. “Commercial horticulture in Germany is subject to fierce competition at both the European and a wider international level. Vegetables, fruit, mushrooms, ornamental and tree nursery crops are among the most price-sensitive products that are subject to the imperative of trade. Increased production costs caused by expensive, reduced-peat substrates are detrimental to growers. It’s important to lower the proportion of peat gradually and – as far as possible – taking market conditions into account.”

By the event’s close, some provisional conclusions had been drawn. “Peat reduction is definitely a challenge for all those involved,” Dr Thomas Schmidt said. “The substrate industry must start work today on creating the raw-materials base it will need for the products it will sell in 10 years’ time. We shouldn’t miss this opportunity to help mitigate climate change.” By way of response, Moritz Böcking remarked: “Both the growing-media sector and policy-makers have an equal obligation here. Instead of a peat reduction strategy, what we require is a binding raft of measures to ensure that the substrate industry can access alternative raw materials and that horticultural businesses are supplied with reliable products. In this connection, the use of domestic and imported peat must remain at the level necessary to ensure that growing media do their job effectively.”

Despite the differing views expressed, the participants agreed that concerted effort is needed to ensure long-term supplies of growing media. A follow-up event is to be held next year so that work on this important issue can continue.

Federal ministry urges that peat use be cut substantially

The German federal government’s climate targets for 2030 formed the background to the conference. Plans to achieve them include reduction of domestic peat extraction and of peat usage in growing media. In the light of this, Klasmann-Deilmann and the substrate producers who belong to the IVG industry association adopted a voluntary commitment in 2020. It envisages reduction targets for peat use: by 2025, 50% in the case of potting soils for the consumer segment, and 20% in the case of growing media for commercial horticulture. From 2030, the aim is to use alternative constituents to substitute peat by 70% in the consumer market and 30% in the professional sector. Julia Klöckner, Germany’s Federal Minister for Food and Agriculture, acknowledged that the substrate industry was heading in the right direction with its efforts, but called for higher reduction targets. The management of various DIY retail chains have been requested in writing to specifically assist in the achievement of reduction targets. The chief reason for this initially cited by the BMEL was that peat production and use accounted for 2% of annual CO2 emissions in Germany. This figure was then adjusted downwards to 0.2% in response to the protests of the substrate industry. 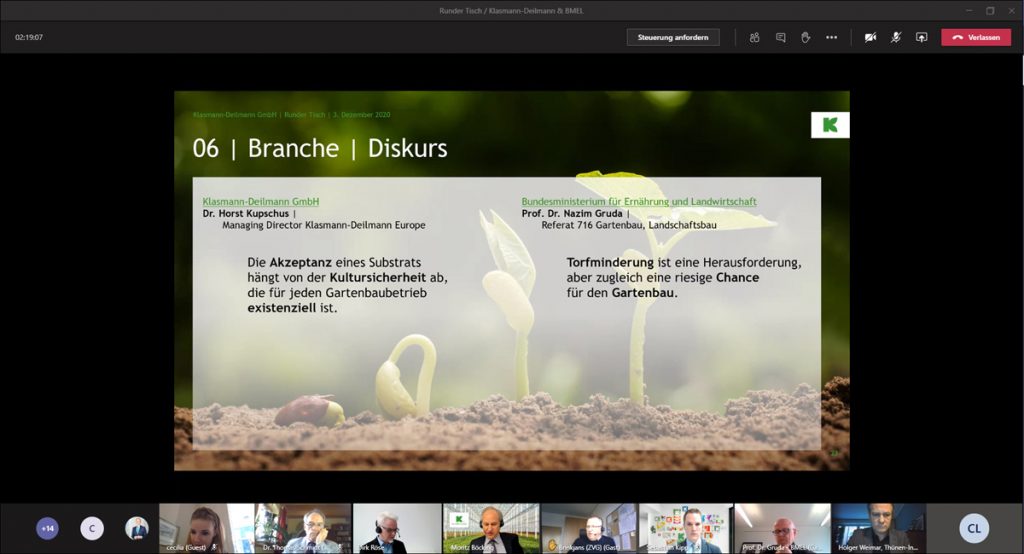